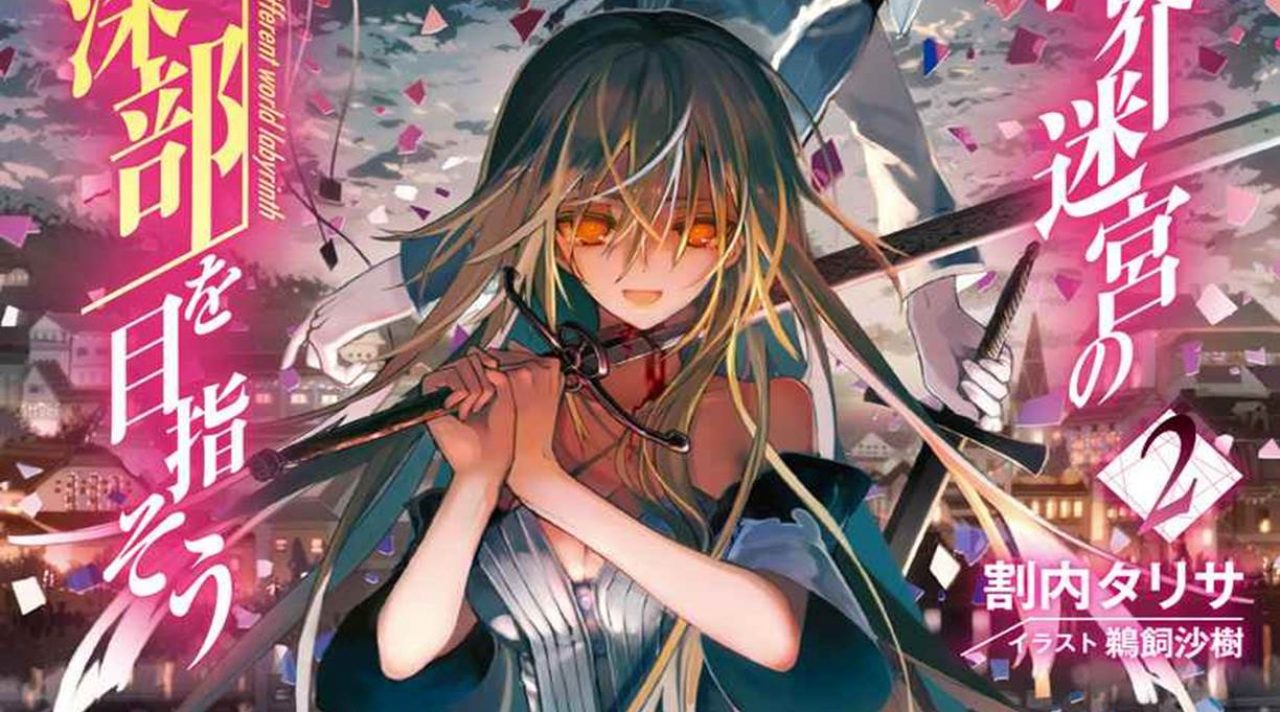 Hey, finally, the next chapter!

The next day, Maria appeared while I was experimenting with my magic in the living room.

I don’t intend to ask her about last night’s… events. But she does look like she’s in quite a foul mood, since she’s staring daggers at me. Maybe I’ll try to raise her mood somehow later. Anyway, luckily, she came just as I finished my own chore. I tried and succeeded in placing a waypoint in the living room with [Connection], so this way we could get home from the labyrinth faster. The only drawback is that using this waypoint will use up a lot of my MP.

Lastiara disappeared somewhere earlier, but later came back while carrying… a big bunny bag. Apparently, it contains equipment and tools that she uses during dungeon diving. Well, the bag itself is totally beyond my expectations, though.

I offered to place her luggage in my own magic bag (which is actually [Storage]). Together with her luggage, because of Lastiara’s addition to our party, I start to wonder if the supplies I bring is enough for the three of us.

Finishing our preparations, we immediately head over to the labyrinth.

Maria follows me out of the house with Lastiara smilingly tagging along behind.

Halfway to the labyrinth, Lastiara whispers,

“Hey, Sieg. Are you serious about bringing Maria along with us?” (Lastiara)

“Well, you see, I checked out her status with my own skill, and I saw that her values are quite low. I thought she was just a maid, since I did see her with the Cooking skill.” (Lastiara)

Her anxiousness about Maria’s well-founded because she has a skill sort of similar to mine, but I I’ve already decided earlier that Maria, despite her stats, is well-suitable for labyrinth exploration.

“I don’t think her abilities are enough, Sieg. The skills she possesses are also lackluster for fighting. Her doesn’t seem to have much talent in fighting either. She’s risking her life much more than us by being in the labyrinth. Is that alright?” (Lastiara)

Well, I originally did plan on having Maria as a housemaid only, but…

Lastiara said coldly, with a hint of anger.

I do agree with her, especially since she’s the logical person about this. But I have this feeling that bringing Maria to the labyrinth was the correct choice.

“—Yeah, alright, then it’s up to you then. In fact, I’d like it if we were to face an even more dramatic situation than just having Maria be in danger. Fufufu~” (Lastiara)

“You really have bad taste, you know that?” (Sieg)

“What, you think we’d be able to reach the deepest part of the labyrinth without danger? I just hope we could at least reach the 30th floor.” (Lastiara)

“Nobody’s ever conquered the 30th floor. First, let’s focus on getting to the 20th floor first, then we’ll grind in the middle floors and raise our levels before we try the 30th.” (Sieg)

“Hmm, the monsters before the 20th floor are indeed weak. Let’s hurry and get above the 20th.” (Lastiara)

“Yeah, I also want to get to the deepest floor of the labyrinth, but…” (Sieg)

“If it’s just that, I have a suggestion.” (Lastiara)

She walks faster, and right in front of the labyrinth’s entrance, she unsheathes her white sword with a smile.

“Leave all the weak monsters to me. Just watch over Maria, Sieg.”

Immediately after, she runs into the labyrinth

In the vast corridor of the labyrinth, numerous wolf-like monsters could be seen brought up to a corner. Supposedly, if it’s just Maria and I, we would have just walked through them. According to experienced adventurers I’ve talked to at the bar, it was best to avoid unnecessary fights with unnecessary monsters. It’s because even if some are considered weak enemies, there is always a risk. Fighting in a group is also advised.

But, right in front of us, Lastiara is annihilating a group of monsters by herself. She did say that she’ll handle the weak monsters, so she probably thought this as an opportunity to show us her skills. Maria and I could only watch from behind. Not losing such an opportunity, I use my own magic to observe her properly.

Due to wearing thing armor, Lastiara is able to avoid all of their attacks while at the same time countering with her own. But it’s apparent that she doesn’t actually have a unique style of her own, and that she’s purely relying on her physical strength born from her high levels. But there wasn’t any bloodlust in her actions.

Her attacks are as swift as lightning. Even though I mentioned that she apparently didn’t have a unique fighting style, her movements are still quite good. Usually, when people are able to move like that, they’re using support magic to enhance their bodies, but there’s no trace of such on Lastiara.

Ah, Maria has quite an amazed look on her face.

Ignoring her, I check the experience point distribution among us. Because having three people in a party enter a labyrinth together is a new experience for me, I thought it important to check if we were getting a penalty or a bonus in experience, as other games usually do.

(ED: Example, PSO2 increases stuff like rare drop rates when in a party, a ‘party boost’ so to say.)

“I also don’t know who she is exactly, but I’m sure she’s an extremely talented person. All I know is that she’s a knight that really wanted me to bring her to the labyrinth with us.” (Sieg)

Shortly after finishing my short conversation with Maria, Lastiara’s finished with her fight.

“That’s why I told you to avoid them in the first place.” (Sieg)

“No way! We won’t be able to reach the top in time if we don’t always take these opportunities to grind as we go.” (Lastiara)

Lastiara doesn’t like to linger on the lower floors, that’s why she prefers the shorter route despite the monsters. The experience we gain helps out yeah, and I also managed to discover 4 details with the system.

(TL: What’re those? He didn’t mention it before…)

(ED: Yeah, it’s confusing. I’ll attach a footnote below if someone’s willing to help with interpretation)

I think about the party system’s mechanics in a daze.

Like that, we proceed with Lastiara as our vanguard, I in the middle, and Maria as the rearguard.

We run after Lastiara from behind like children rushing towards the toy store. In the middle of all this, I remember that unlike me and Lastiara, who possess notable special abilities and are suitable for combat, Maria’s just an ordinary girl. After a short while I could already hear her suffering from shortness of breath.

Maria’s face is blue and she’s clinging to my back. She seems confused.

It seems like she’s quite scared. Is it because of how Lastiara fights? She’s probably insecure about her own insufficient capabilities. I think she feels the same as me, who felt like Lastiara is a monster back when I was low-levelled.

“Well, you don’t have to worry, even if she looks scary. She’s not a bad person.” (Sieg)

Well, she’s not a bad person, but a troublesome one…

“No need to worry, you say—but she’s still scary.” (Maria)

I tried reassuring her, but like I said, it’s not like I don’t understand. Maria’s right, Lastiara looks to be the kind of person who steps on insects without a care in the world. That might be how Maria sees her, so she frightens her.

“It’s alright. Whatever happens, I’ll protect you. Even though Lastiara’s strong, I am too, and I’ll become much, much stronger than her to keep you safe.” (Sieg)

“Huh? Master, would you be able to win against her?” (Maria)

“Well, it won’t be a complete victory, but I have a fair chance. Comparing my abilities with her, there’s only a minor difference if any. So, it’ll be alright.” (Sieg)

To placate her, I declared my honest analysis.

Well, I seem to have succeeded in alleviating her fear at least. But I think I redirected it to a more awkward direction by accident.

Yeah, I alleviated it a bit. That’s what matters. But even though I managed to do so, that’s only a bit. Her fear of Lastiara’s likely to remain. Perhaps she’s insecure about herself being a slave in front of Lastiara, a powerful knight?

“No need to think about it too deeply. If anything happens, you can take anything for yourself.” (Sieg)

After hearing my words, Maria’s face changed immediately. Did I say something I shouldn’t have?

… I really don’t understand her.

But with a bitter smile, she says,

“In the end, my strength isn’t enough even though I wanted to protect you. Now that I think about it, because she’s strong, she should be a good person.” (Maria)

“Last night, I slept with her on the same bed. Before we fell asleep, she told me a lot of stories, so I’m already familiar with what kind of character she has. I admit, I am also curious about her.” (Maria)

“That’s true, she really does seem to like you.” (Sieg)

At least Maria’s expression has brightened up a little. She picks up her pace and in a little bit, is already in front of me.

“Let’s go, miss Lastiara, or I’ll leave you behind.” (Maria)

Looking at Maria from behind, we continue our journey. Since I’m behind her, I can’t see what kind of expression she’s making. I try using magic to see, but her expression’s still unreadable.

[1] The original JP text is this